The day before her Ultra Alcatraz IM swim last year, Conny Bleul-Gohlke called her childhood coach and friend, Rudi Junicke. It’s a nine hour time difference between California and Berlin, Germany where Rudi resided and Conny grew up. By the time Conny called, Rudi was asleep, so his wife answered the phone.

Conny’s swim was in honor of Coach Rudi. For the past few years, Rudi had been battling cancer of the esophagus. When Conny called, Rudi’s wife told her that Rudi’s cancer was looking bad and that he had to go to the hospital the next day. “I was just hoping that I can talk to him the next day when he's in the hospital. I said, ‘I'm going to do the swim, and I will send pictures when I'm done,’” Conny recalls.

Conny completed her swim on the morning of September 10th, 2020. As promised, she sent photos of her swim to Rudi. He saw the photos before he passed away, a couple of days later.

“I found this so powerful. It still gives me Goosebumps, because I didn't do the swim for him to die a day later. But the timing is really mysterious. And the entire conditions [related to the swim],” states Conny.

It was a calm day September 10th 2019 when Conny came up with the idea for her swim.  She had spent much of the summer swimming in the Bay. Moving through the nice flat water she thought “I want to do something for my coach.”

“He gave so much to me,” she continues, “And I thought ‘What can I do?’ Then this idea popped up, and I had to do something with IM (individual medley, swimming all four strokes in one event). I swim Alcatraz so often, so why don't I try to swim an Alcatraz IM”

Conny’s plan was to swim butterfly from San Francisco Aquatic Park to Alcatraz. She would then do a lap of backstroke to Aquatic Park, then breaststroke back to the island, and finally a lap of freestyle. The total distance would be approximately 5.2 miles, with each lap consisting of 1.3 miles.

“[The swim] was just for me and my coach,” she explains. 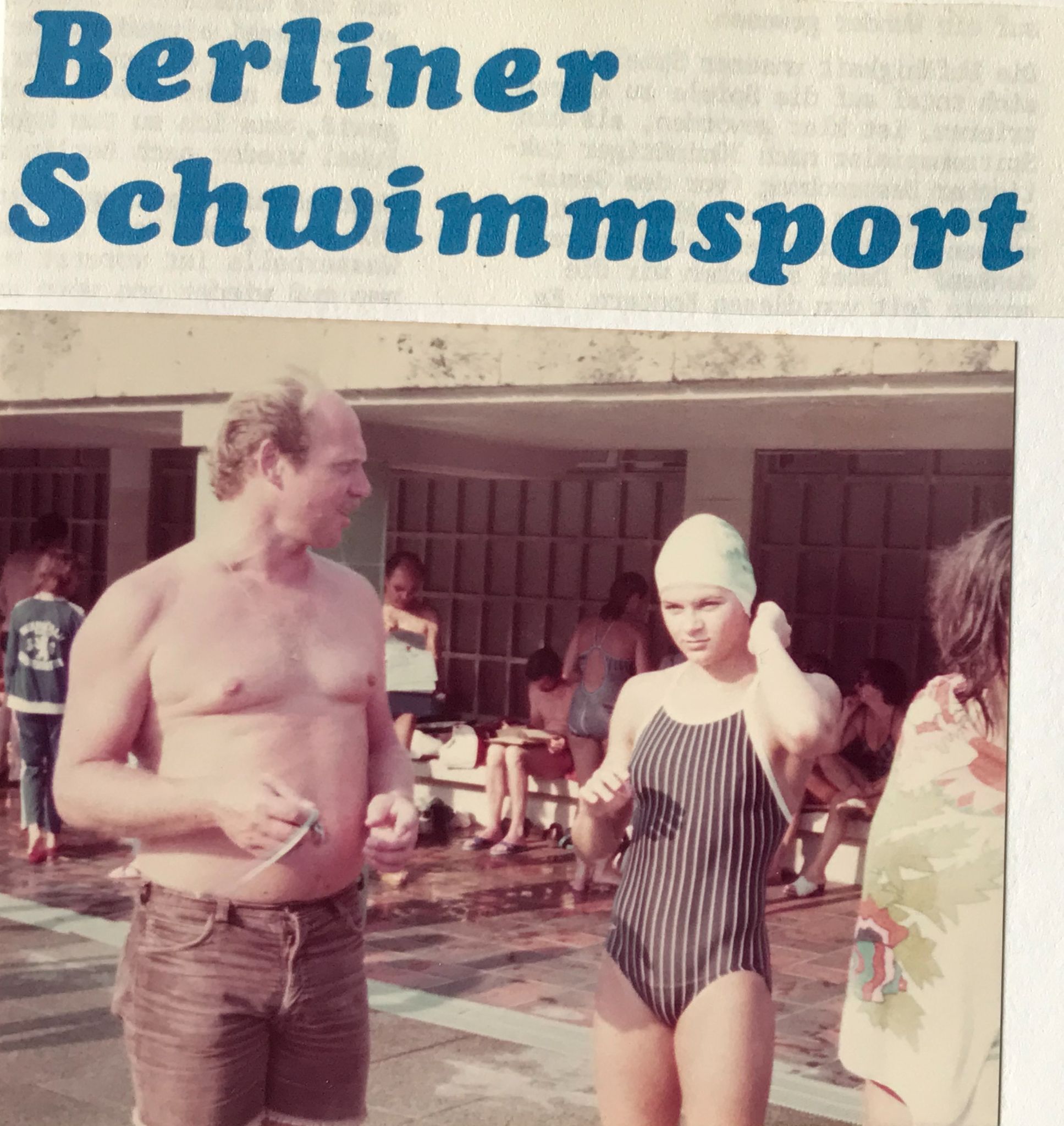 By this point in time, Rudi’s health had declined but he was still going to the pool to coach the children at his swim club, BSV92. Coaching was Rudi’s life and he maintained his dedication to swimming and coaching throughout his condition.

Conny met Rudi when she joined BSV92 at age six. She swam with the team until age 18, developing a specialization in the 400 IM. During that time she swam for the German National team at national and international competitions including two World Championships. In 1984, Conny was part of the Olympic team for the upcoming Olympic Games before an accident prevented her from going.

“I had very good memories of all his coaching when I was a teenager. We got along very well. He and his wife were like second parents to me. He actually guided me through all my life” she recalls.

After age 18, Conny continued her friendship with Rudi, developing a strong bond that remained when Conny moved to the United States. Every year, Conny returned to Berlin and visited BSV92 and Rudi. Rudi was the witness at her wedding, and she has fond memories of him holding her oldest son while she swam as a Masters’ swimmer.

The swim started at 5:30 am. There were a couple of unforeseen events that could have ended Conny’s swim before it started. Covid impacted her training by limiting her access to a pool. Furthermore, her swim occurred the day after smoke from the California wildfires turned the sky orange and heavily impacted the air quality.

In the water with Conny was one of her South End Rowing Club team members, Miguel, the kayaker, with a headlamp. On a nearby boat, the rest of the crew was present to support Conny. Sue Free, a friend of Conny’s who had swam with her in open water swims, was in charge of feeding Conny during the swim. Also on the boat was Gary Emich, who had used his knowledge of Alcatraz and current patterns to help Conny pick the date for her swim, and Jeff Cooperman, the photographer.

Despite the light from Miguel and the glow sticks on the boat, when Conny entered the Bay at Aquatic Park, she couldn’t see very well with the smog. Normally, you could see the lighthouse on Alcatraz Island no matter how dark it is, but on this day Conny couldn’t see the island. Having previously told the crew not to disturb her for the first ten minutes, she started swimming in the wrong direction—towards the Golden Gate Bridge. At that point, Miguel paddled over and redirected her towards the island. The team had a laugh, and she followed Miguel for the rest of the leg. 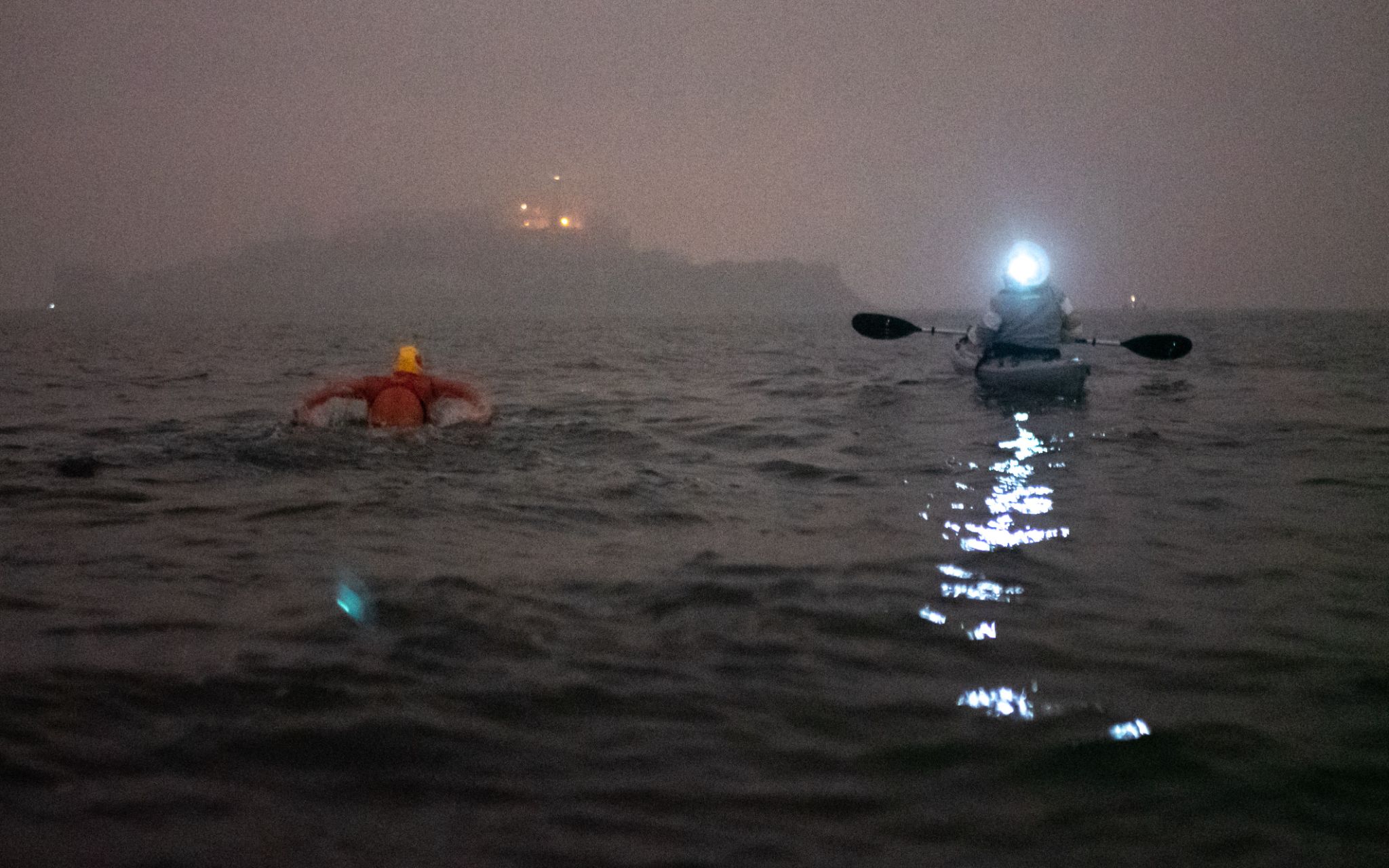 Midway to Alcatraz, Conny could see the lighthouse and was able to tell where she was going. Her fear of not getting enough air and other worries associated with not being able to see clearly began to dissipate as she came closer to the island. “You just have to keep [those worries] out of your head. But once I saw the island, I was very confident and found my rhythm.” 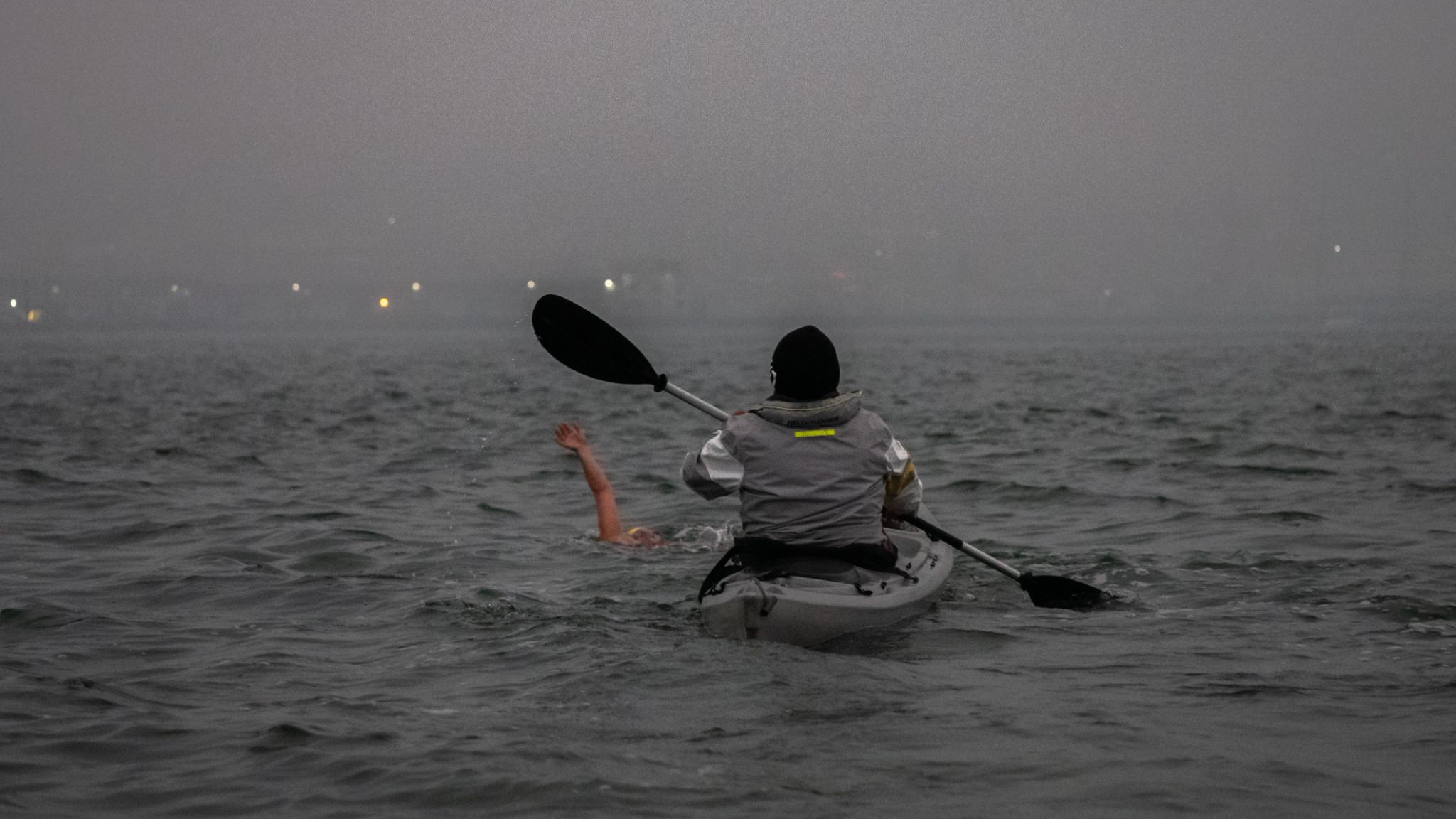 For backstroke it was a little trickier to navigate. Again using Miguel as a guide, Conny swam backstroke in front of the kayak, using it as a guide by looking backwards.  Finally came the breaststroke and freestyle legs.

In total the swim took her two hours and 16 minutes. At the end she was tired but happy to have completed the swim. No one had ever done this!

“You know those situations where you are physically really tired but because you have achieved such a big thing. Your mind is so happy that you think you could go on forever. I was just happy to have done this. It took almost an hour less than I planned…The last lap was like pulling home. I did not exhaust myself completely. I enjoyed it. There were Pelicans flying right over my head close to Alcatraz island. It was beautiful.” 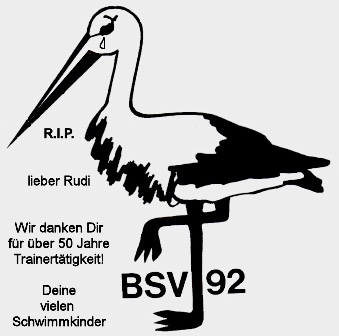 Throughout the swim, Conny thought about Rudi.

“I was thinking about our training, how brutal it was sometimes. Every other Tuesday, I had to swim ten times 400 IM on seven minutes. You can imagine how much fun he had sitting next to me and writing down every split. And then the traveling, losing, winning” Conny recalls.

“It wasn't just swimming as a kid and teenager with these high performance workloads. It was  later when I was a master swimmer. Swimming for fun. All those thoughts were in my mind. Sometimes very sad. Pictures: seeing him being sick and not able to eat anymore, him with an artificial feeding tube at the end. But then also pictures where he was surrounded by the little kids he coached until he went to the hospital. The kids were admiring him.”

Since her swim a year ago, Conny has swam other open water events including around Coronado Island in San Diego and recently, the Catalina Channel Crossing. She plans to swim around Manhattan in a few weeks and the English Channel next year.

With her Ultra Alcatraz IM, Conny not only wanted to give back to the coach who made an enormous impact on her life, but to also inspire without fanfare “I don't want an award for it. I'm just very happy that I was able to do this for him” she explains. “It's showing people who really want to do something, you can do it. And it's good to give something back.” 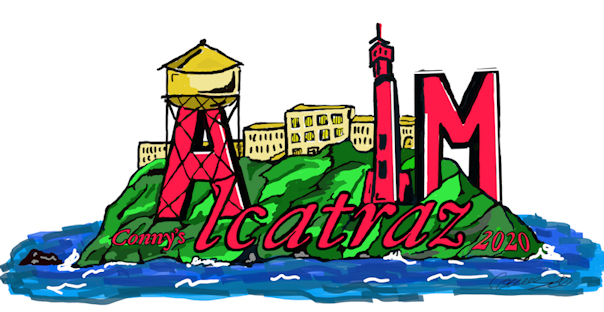 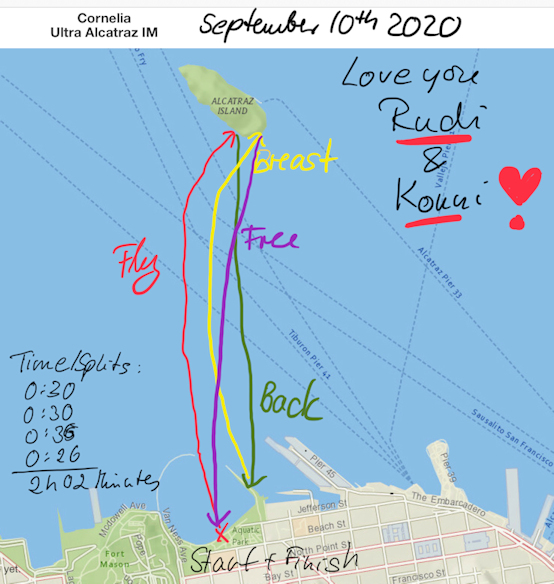 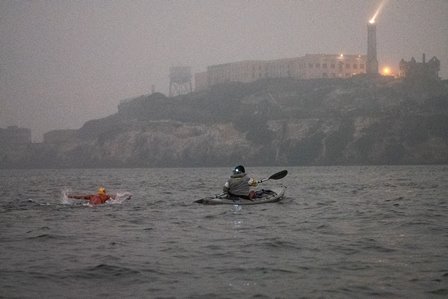 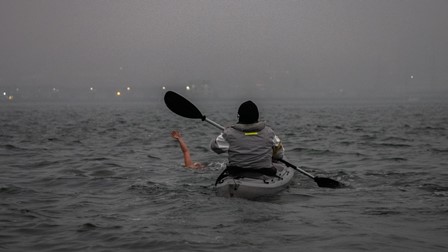 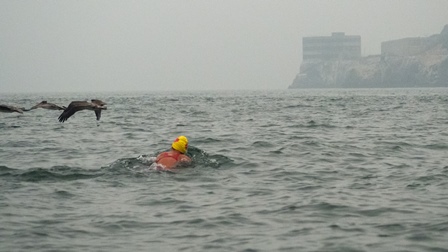 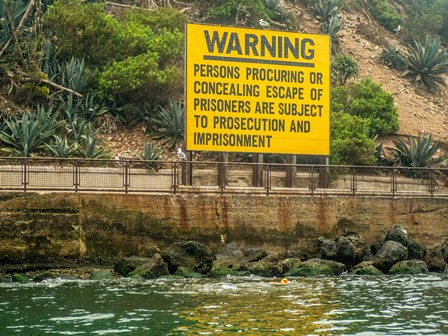 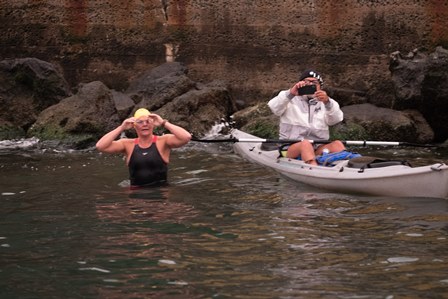 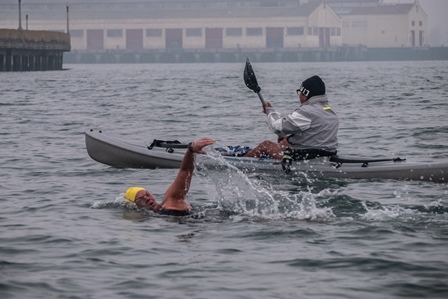 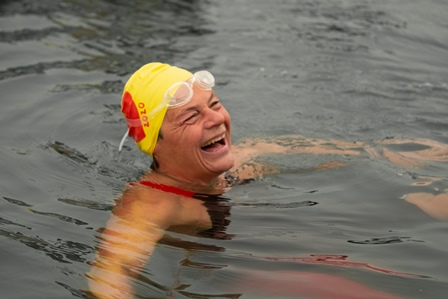 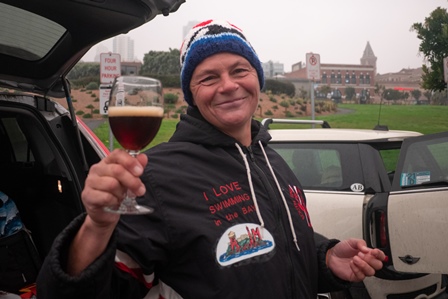